Paymaster Crawford delaying payments to 3rd, claiming illness. This after rumors had appeared in RMN to the effect that nobody was getting paid at all, and congressmen spoke of withholding pay. But the companies were all planning on gathering and marching in uniform at various times to get their meager compensation, so potentially a very dicey situation was at hand. Denver was always on the verge of some sort of mob riot in those days.

About a week later, the paper reported that Crawford was feeling a bit better.
Posted by Robert Hurst at Sunday, February 13, 2011 0 comments

NOTE: PIONEER PLATES, a digital notebook of Colorado history, is back in the saddle after a long book-writing hiatus. Thanks for reading -- Robert


A celebration of events back East. (Not everybody wanted to celebrate surely.) 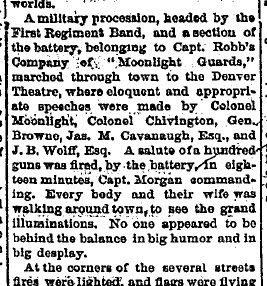