Just a little something I've never really considered before -- The proximity of Soule's assassination to this other event, the marriage of his young bride's mother (Sarah Coberly) to her second husband William Crull. I don't know, it's probably nothing. But it is somewhat weird timing. Then, rather than move back in with her mom in Huntsville, Hersa heads to Kansas to stay with Soule's brother. Perhaps there is an explanation in the letters, I don't know.
Posted by Robert Hurst at Thursday, June 30, 2011 0 comments 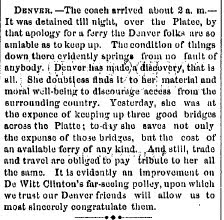 Squires would have been better off going north.

..Not that he didn't escape in the end anyway.
Posted by Robert Hurst at Thursday, June 30, 2011 0 comments

Speaking of Sarah Coberly, here's the announcement of her marriage to William Crull in May 1865.

Crull's big red barn was a well-known landmark on the Denver-Colorado City route; a one-room log cabin which may have been built by him is still standing near the Tomah Road exit on I-25, a preserved historical site.

The marriage didn't last. It was Sarah's second of three. For reasons not entirely clear, some in my family are under the impression that William Crull abused his adopted daughter Lizzie Field Crull.

This helpful list of largest taxpayers in the county from 1871-2 has a bunch of familiar names including but not limited to Barney Ford, all the big developers, D.C. Oakes and Sarah Crull, formerly Mrs. Coberly of Coberly's Halfway House. Sarah Coberly was one of the first white women in the Territory and, through mysterious circumstances, the adopted mother of my great great grandmother Lizzie.

The Commonwealth offered this shout-out to Barney Ford in 1863. There doesn't seem to be any mention at all in the Racist Mountain News. 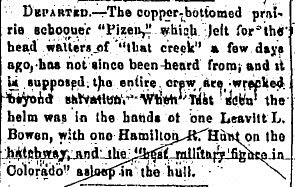 Saw this while looking at Barney Ford Peoples' Restaurant ads. 1863 was pretty quiet. Who is the third person mentioned, the '"best military figure in Colorado"' -- Wynkoop?
Posted by Robert Hurst at Saturday, June 11, 2011 0 comments

Yesterday I happened by 1514 Blake Street, and learned via a plaque there that the very same building was the longtime site of Barney Ford's People's Restaurant (and a barber shop in the basement). Other than seeing the ads in the Racist Mountain News I don't know too much about Ford or his restaurant, but I know he was an escaped slave, and that the restaurant was a popular institution. The modest building has been standing since 1863. The original structure was destroyed in the "great fire."

The second selection shows that Ford's restaurant passed to Riethmann for a time. Later ads imply it's back in Ford's hands.

I'll post some more about Ford in coming days. In the meantime, go check out 1514 Blake and the surrounding block of old buildings to get a sense what this bustling little business center was like 150 years ago. The India House restaurant is the current occupant, so you can even get some sense of what it was like to eat here. Just imagine hoof-clomping wagons instead of cars, and boots stomping on the boardwalk. And gunfire. 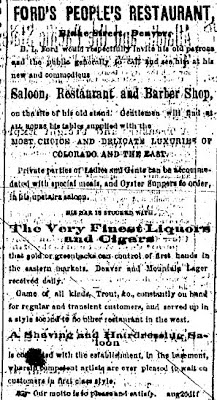 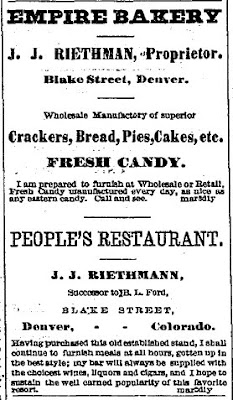 Why Don't You Marry It Then 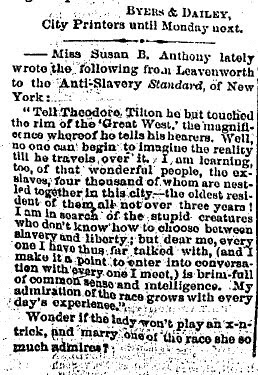 This jab at Susan B. Anthony is a weird little twist in the Rocky's irrepressible racism. If she likes negroes so much, maybe she should marry one. Wouldn't that be totally wacky? Racist Mountain News already went off on "miscegenation" in another issue or two.

Another reminder that these Colorado Unionists, represented by Byers, are also racists, overwhelmingly, who would prefer their Union to keep the slavery if possible.
Posted by Robert Hurst at Sunday, June 05, 2011 0 comments

I like to monitor all the Hunt news, you may have noticed. As did Byers. Makes you wonder if A.C. picked up the paper that morning and spewed his coffee.

Also another bit on oil. The papers were obsessed with oil/petroleum in those days. What it's being used for, how rich people are getting off of it. And not a car in sight. 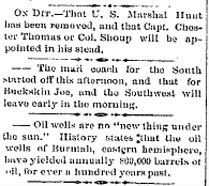 Bowen and the Box

Notorious alcoholic Leavitt Bowen dead in Denver, then eulogized by Chivington. Lots of people were. Officers dropping like flies. And another story that reminds us how things have changed.