From Omaha to the West Coast. This idea has been associated with Jefferson Davis, pre-Civil War; I wrote a little about that in my book Cyclist's Manifesto. 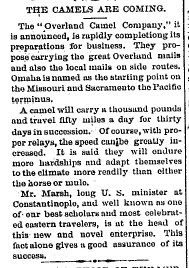 E. Scudder on the vindication tip.
Posted by Robert Hurst at Sunday, May 29, 2011 0 comments

Here we see an early and particularly frenzied spasm in the campaign to restate and reshape the Sand Creek story, at the Union Party convention in Denver, October 16, 1865. As you can see, nothing less than the moral standing of America in the Christian world is at stake. According to Lamar, The Far Southwest, Stephen Decatur is the point-man behind this campaign. 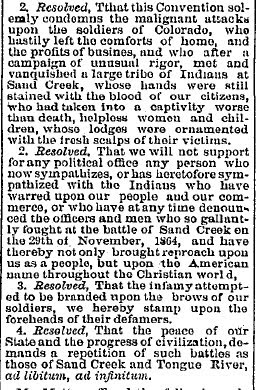 In the same issue, Chivington announces a candidacy for congress by telegram from Omaha. He and Evans had been removed from the Union party scene after Sand Creek came to light.
Posted by Robert Hurst at Sunday, May 29, 2011 0 comments