Byers was always commenting on the various officers who were in town, hinting at their demeanor and politics. 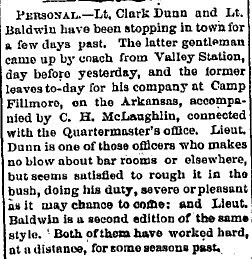 Lt. Clark Dunn was in town to testify before the Commission; he told them that he had had an engagement with some Indians near the Platte in April 1864, testimony meant to establish the hostility of the tribes in Chivington's defense.

The day after Sand Creek, with the bulk of the soldiers camped near the killing zone, Dunn asked Chivington if it would be okay to execute Jack Smith, the halfbreed son of the trader John Smith. Jack Smith had been living with the Indians in their village and was taken captive by the Third. Chivington gave some weasily non-answer, to the effect of, you know what I think about that, and at some point afterward an unidentified soldier cut a hole in the lodge where Smith was being held and shot him through the hole.

Lt. Horace Baldwin (Independent Battery) was named by Soule as one of many soldiers who may have ended up with some of the ponies from Sand Creek. He was also heard to speak ill of Chivington at Ft. Lyon before the massacre, and with several other officers signed a letter of support for Wynkoop on Nov. 24, 1864.
Posted by Robert Hurst at Sunday, March 13, 2011 0 comments